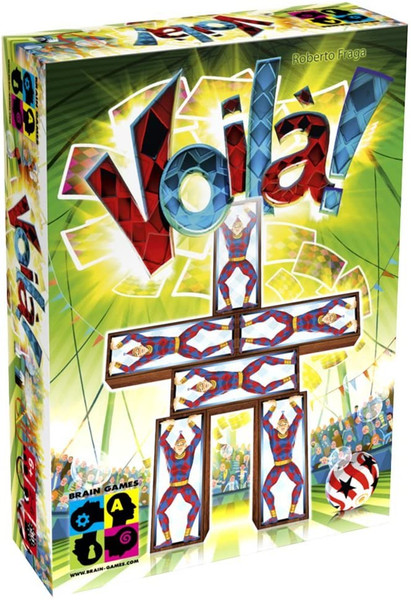 Agile acrobats, swift jugglers and brave fire-eaters - that's circus as you know it and finally you can be part of all of the fun! Voilà! is a fast-paced dexterity and push-your-luck type of game that will challenge your agility and finger swiftness.

In Voilà! each player tries to get as many points as possible by completing various dexterity tasks. In a turn the player pulls out a token from the bag, which defines how many tasks the player has to complete (either none, one or two). However, for a turn player has limited amount of time, which is kept hidden from them by another player.

After pulling out a token the player draws the corresponding amount of cards and tries to complete the tasks depicted of them. There are many different tasks, for example, throwing the token in the air and catching it, or creating a tower from acrobats and so on. After player has completed the task(s) they can either end the turn and thus get the points, or try to get more points by pulling out a new token and then completing the tasks. However, if the player chooses to continue, they must complete the task before they can end the turn and this is the risk - if the time runs out while they are still performing the task, the turn ends immediately and the player doesn't receive any points this turn (any cards the player completed during this turn are put in the discard pile).

The game ends after each player has had three turns and the winner is the one with most total points on their cards.