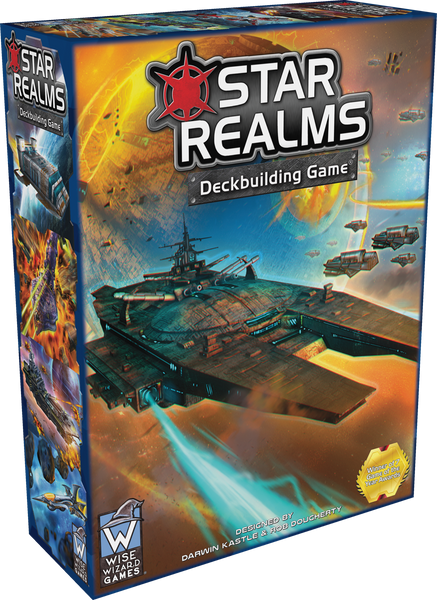 Forge your own star realm! Build up your military through shipping and trade, then use your mighty fleet of warships to protect what’s yours and take what isn’t!

Designed by Magic hall-of-famers Darwin Kastle and Rob Dougherty, Star Realms combines the fun of deckbuilding games with the interactivity of trading card game‑style combat. As you play, use trade to add new ships and bases to your deck. When played, those ships and bases generate powerful effects, additional trade, and combat to attack your opponent and their bases.

If you reduce your opponent’s score to zero, you win!

The Star Realms Box Set includes all of the cards from the Star Realms Core Set and Gambit Set, plus a game board and two additional starting decks, providing awesome gameplay for 2-4 players. And The Pirates of the Dark Star and the Nemesis Beast challenge cards provide additional solo and cooperative play options! Each box is a complete 4-player game containing rules and 162 cards.

In Too Deep Kickstarter Edition

Merchants of the Dark Road