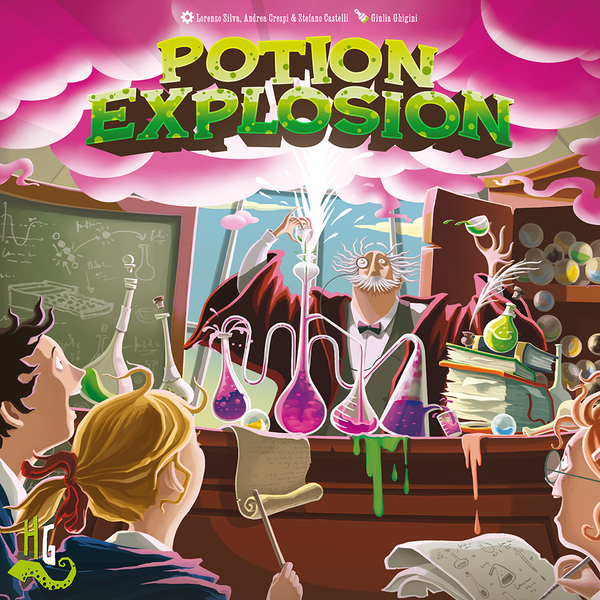 In Potion Explosion™ 2 to 4 players are students attending the final exams of the Potions class! They need to complete their potions using the marbles they collect, drink them to unleash their magical power and ultimately win the Student of the Year award!

To brew your Potions, take one Ingredient marble from the Dispenser each turn, and make Ingredients of the same color collide to make them explode (and take them too)! The bigger the explosions, the faster you’ll brew your potions! Each Potion recipe may need between 4 and 7 Ingredients. They are represented by the
holes on the Potion tiles themselves.

Put the marbles of the correct color on your Potion tiles: when all the holes have been filled with a marble of the corresponding color, the Potion is completed. Each Potion is worth a certain number of points, which depends on the number of Ingredients needed to complete it and the strength of the magical power it grants.

When a player completes 3 Potions with the same power, or 5 Potions with 5 different powers, they receive a Skill token, which is worth 4 points. When the required number of Skill tokens have been awarded, the end of the game is triggered… and the player with the most points is the winner!