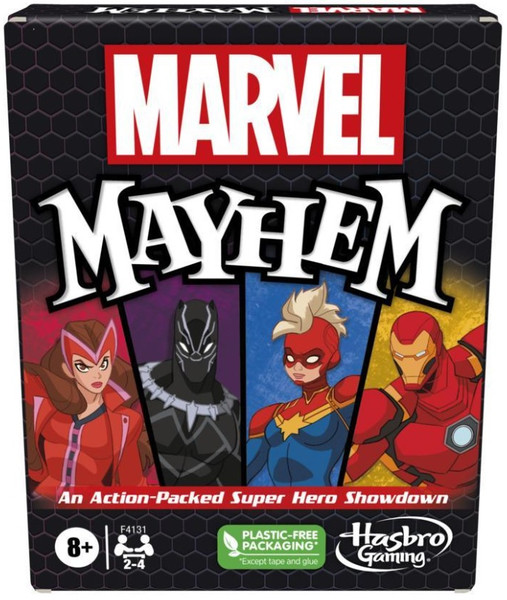 It's a super-fun, super-exciting Super Hero showdown! In this fast and furious, easy-to-learn game for families and kids 8+, players choose a character deck and play cards that feature unique super powers and allies. Harness Black Panther's speed, learn the power of manipulation with Scarlet Witch, unleash Captain Marvel's cosmic powers, or strategize with Iron Man's armory. Players protect their hit points while doing damage to opponents as they try to be the last Super Hero standing to win. The Marvel Mayhem card game features comic-inspired custom illustrations, iconic Marvel character phrases, and fun humor. This fun card game is filled with action and suspense, and can be played in about 10 minutes. Break out the game for a family game night. It makes a great gift for Marvel fans. Copyright 2021 MARVEL. Hasbro Gaming and all related trademarks and logos are trademarks of Hasbro, Inc.

MSRP:
Was:
Now: $13.99
-OUT OF STOCK- please contact us about ordering this item

Welcome Back to the Dungeon