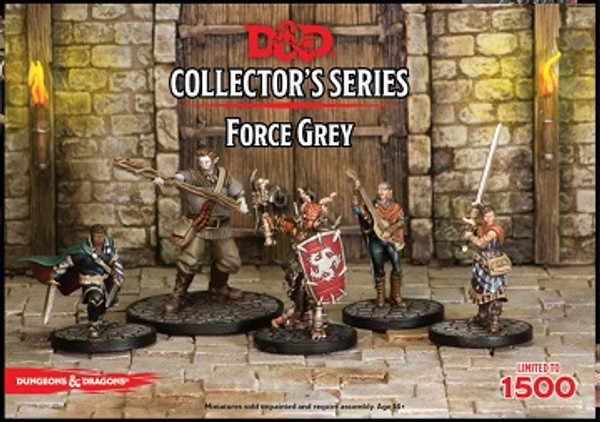 The Force Grey group have pitted themselves against the giants in Season One and the Tomb of Annihilation™ in Season Two, bringing live D&D® to Twitch and the world.

Force Grey is made up of an all star-studded cast of “Arkhan the Cruel,” played by Joe Manganiello; “Jamilah,” played by Deborah Ann Woll; “Tyril Tallguy,” played by Dylan Sprouse; “Hitch,” played by Utkarsh Ambudkar; and “Calliope,” played by Brian Posehn.

Arkhan is a Dragonborn Oathbreaker Paladin in the service of the five-headed dragon goddess Tiamat. Thanks to “The Wreath of the Prism” a legendary artifact that he wears around his neck he has gained control of the vicious Manticore “Chango.”

Arkhan’s fealty to the Dark Queen is evident by the sigils emblazoned on the chest of his full plate armor as well as on the front of his magical shield. He carries a powerful battle axe magically fused from the bones of an undead T-Rex called “Bone-Cleaver.”

These miniatures comes unpainted and unassembled. Resin dust can be toxic, so when sanding parts, wearing a mask is recommended.

Dungeons and Dragons: Vault of Dragons