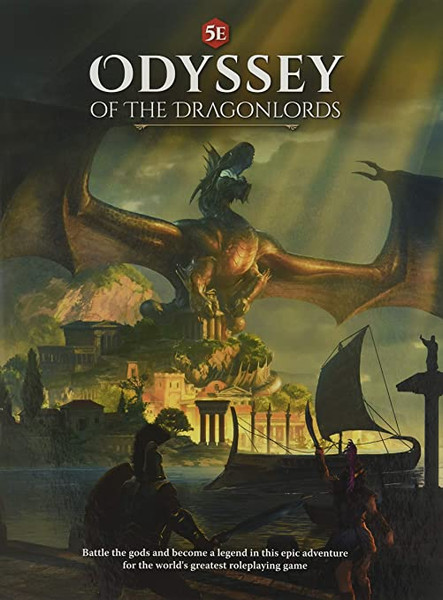 From the lead designer of Baldur's Gate, Dragon Age: Origins, and Star Wars: Knights of the Old Republic...

Odyssey of the Dragonlords is a 460 page hardback  adventure book for 5th Edition, packed with full-color maps and illustrations.

An Epic Campaign. Join with other prophesied heroes to undertake an epic quest to save the world of Thylea, sail the islands of the Forgotten Sea, and battle the Titans! The adventure will take a party of heroes from 1st to 15th level (or higher).

Choose your Epic Path. Includes eight epic paths for players to choose from. Epic paths provide powerful motivations for your hero, making you a central part of the story. Change Thylea’s history forever, and go down in history as one of the new Dragonlords!

The World of Thylea. Includes an overview of the history, factions, kingdoms, and laws of the forgotten continent. Learn about the gods, the titans, and the legendary Dragonlords.

New Monsters. Includes a bestiary of over 30 new monsters inspired by Greek mythology, with lore, statistics, and full page illustrations.

New Magic Items. Includes over 20 new magic items inspired by Greek mythology. Find them scattered throughout the adventure or craft them using the legendary Mithral Forge!

MSRP:
Was:
Now: $38.95
-OUT OF STOCK- please contact us about ordering this item

Dungeons and Dragons Odyssey of the Dragonlords Players Guide

Dungeons and Dragons Odyssey of the Dragonlords Players Guide