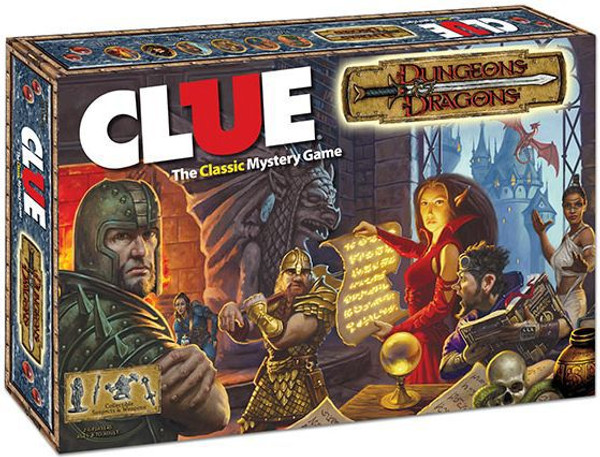 Game description from the publisher: Who killed the Archmage? Was it Tordek in the Dragon's Lair with the Flaming Battle Axe? Or Mialee in the Dungeon with the Staff of Power? In Clue: Dungeons & Dragons, a group of heroic adventurers has been called to the Archmage's castle, but one of those heroes isn't who he appears to be; one of the heroes is a doppelganger, a monster that can look like anyone! In the darkest part of the night, the doppelganger kills the Archmage, triggering a spell that seals the castle until the monster is caught. Now, in the grand tradition of Clue, the six suspects must determine which one of them is the doppelganger: Regdar the Human Fighter, Tordek the Dwarf Fighter, Lidda the Halfling Rogue, Mialee the Elf Wizard, Ember the Human Monk or Nebin the Gnome Wizard. The heroes try to figure out Who killed the Archmage, Where the crime occurred, and Which magical weapon was used. For the most part, gameplay in Clue: Dungeons & Dragons is identical to standard Clue as players roll a die, move into different locations on the game board, then make accusations against a particular combination of who/where/which cards and a particular opponent; if that opponent holds one of those cards, she must reveal it to you. Eventually someone will narrow down the possibilities and make an accusation as to exactly which cards have been removed from the game; if correct the player wins, and otherwise she's out of the game and play continues for everyone else. One optional element in Clue: Dungeons & Dragons is the Wandering Monsters deck. After landing on a "claw-marked" space on the game board, the player draws the top card from this deck, then battles the creature shown by rolling a die. If she wins, she gains a magic item that confers a single-use special ability, such as looking at a random card from an opponent's hand or taking an extra turn. If she loses, her token is placed in the center of the game board, from where it will take several turns to move back into a room (and get back into the game).

Dungeons and Dragons: Dungeon of the Mad Mage

Dungeons and Dragons: Vault of Dragons