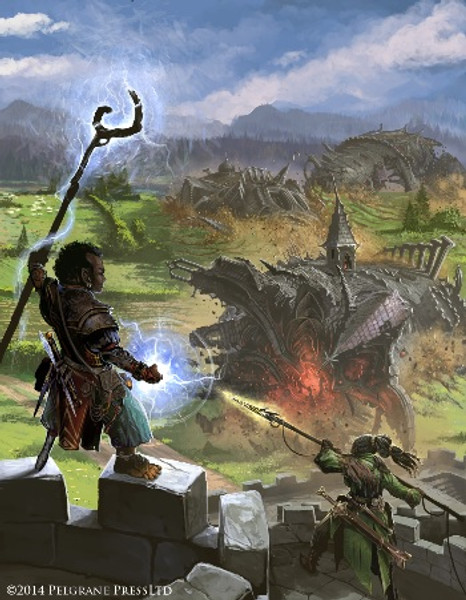 Ask about our Bits and Mortar program where purchasing the physical copy of the book will also grant you a free PDF of the same material!

Some of the many monsters trapped in the living dungeon are the Custodians – a group of earth elementals forced to serve the animating spirit of the dungeon. Ever since the Stone Thief was blinded when the Prince of Shadows stole its eyes, the Custodians have maintained and monitored the upper levels. They manifest as gigantic stone heads that emerge from the walls of the dungeon.

Eyes of the Stone Thief describes seven of these Custodians – the Doorkeeper, the Butcher, the Gravekeeper, the Pearlkeeper, the Architect, the Vizier and the Curator. However, there might be more Custodians in the dungeon that aren’t tied to specific levels.

The same rules apply to these Custodians as to the others. They can appear anywhere in the upper parts of the dungeon. They can restructure the rooms around them, moving traps or monsters into the path of the adventurers. They can be killed, but will usually flee by sinking back into the wall rather than risk destruction – unless the Stone Thief forces them to stand and fight, because the Custodians fear the hunger of the living dungeon more than annihilation at the hands of adventurers.

MSRP:
Was:
Now: $14.99
-OUT OF STOCK- please contact us about ordering this item

13th Age Book of the Underworld