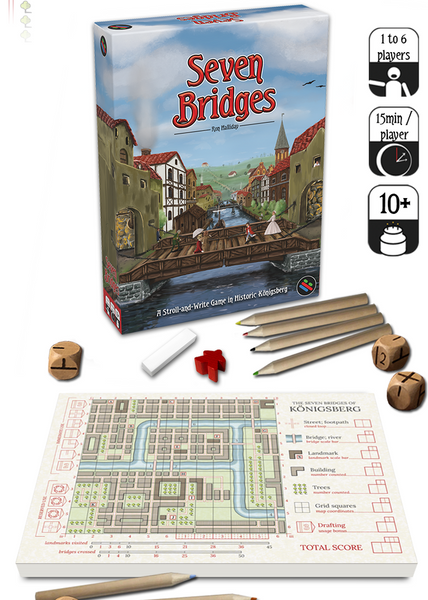 Come explore the European city of Königsberg and learn about the logic puzzle that made its bridges famous!

SEVEN BRIDGES is a roll-and-write dice drafting game in which players explore the historic city of Königsberg by colouring in connecting streets on their map. Points are earned by seeing different parts of the city, but the various ways to earn these points are only unlocked by crossing the city’s seven bridges.

Six dice are rolled at the beginning of each turn, and each player drafts the roads from one of these onto their map. Should they select the one that lets them travel furthest, or the one that points them in the right direction? After five rounds, the player who tallies the most points wins!

SEVEN BRIDGES stands out from most other roll-and-write games because it includes a map of a real-world city created by a professional cartographer! The elements of the game itself have been cleverly ‘superimposed’ onto the map as an overprint, a technique once used to update or repurpose outdated maps.

Betrayal at House on the Hill

MSRP:
Was:
Now: $82.99
-OUT OF STOCK- please contact us about ordering this item

A Game of Cat and Mouth

MSRP:
Was:
Now: $42.99
-OUT OF STOCK- please contact us about ordering this item