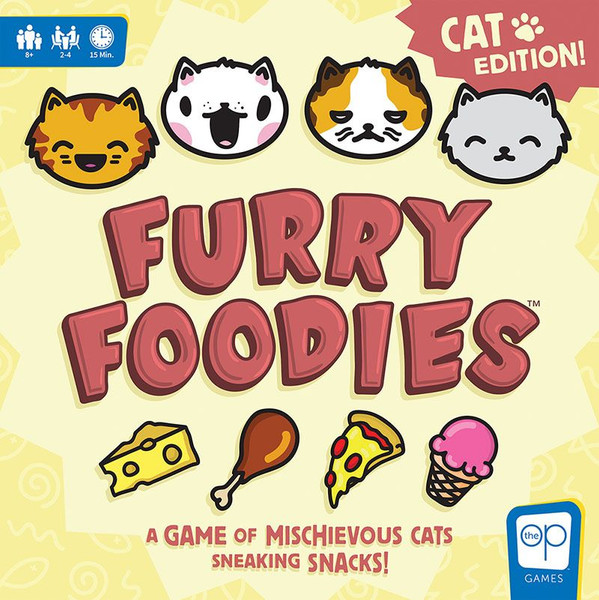 In Furry Foodies, you are a hungry cat sneaking snacks, while the humans in the house aren’t looking. With a little cunning and the bat of a cat paw, you will push plates out of the grid to collect them. But beware of broken plates, you might attract the attention of those clueless humans. Collect sets or runs of a variety of foods to score points. It is the number on the plates in the group that scores and not the rank on any given dish. The player with the highest score wins. We’re just here for the food! It’s always mealtime for these mischievous kittens! In this light strategy game, act as your favorite feline and snatch as much food as you can by pushing plates off the edge of the table. Food on the floor boosts your score! The cat with the most plate sets and sequences gets the delicious win. How will your hunger add up? Start sneaking snacks to be the fullest cat in FURRY FOODIES! Contents: • 6 Cat Movers and 4 bases • 4 Double-Sided reference cards • 64 Food Tiles numbered 1-8 • 2 “Wild” Food Tiles • 15 Broken Plate Tiles • 7 +1 Move Tiles©2 • Rules Kitty Bios: Snowball No challenge is too great for this white wonder! This high energy fur ball can take down a pawful of Christmas tree ornaments in a single swipe. And be sure to guard your dinner plate, because if it’s fish night, Snowball will jump, drag and devour the salmon before you can say “Bad Kitty!” Will his youthful exuberance ever let up? Only time will tell for this fiendish feline! Fluffbucket Underneath all that fur is a well-muscled kitty ready to pounce. His favorite pastimes include batting at the window shades, chasing birds in the backyard, and hiding under furniture where he can easily attack an unsuspecting person’s legs. One of his favorite foods is ice cream, but he is a bit of a snob and will only eat from a spoon. Cleo The cat of many colors! Nothing gets this gal going like the drip from a water faucet. She loves to squeeze her ample body into the sink, waiting as the anticipation builds. Then all of a sudden…drip! Cleo will try to catch the drip, eat the drip and stick her head into the faucet looking for the source of that crazy drop of water. Rusty Rusty is a handsome tabby with a knack for causing mischief. While he has all the cat toys his heart desires, his favorite toys are the ones from the trash can. This curious little kitty can’t help but get himself into trouble. He’s fallen out of every window in the house, been accidently locked in many a closet, and stolen countless snacks from his humans. Despite all his flaws, he’s still a sweet little guy who’s favorite thing is to cuddle with his best friend. Lola Lola is a giant beast with a magnificent mane and enormous paws, but looks can be deceiving. Unaware of her regal appearance, she squeaks and leaps into your arms at the slightest frightening noise. Lola loves people, and refuses to eat her kibble until she’s been given an approving pet. She is happy to plop down on top of whatever her humans are doing, just to make sure she is always the center of attention. Flapjack Just about the time his humans are crawling into bed, Flapjack begins his evening prowl. Not content to walk along the floor, prowls begin with a leap from the couch to the fireplace mantle from there it is a small hop to the top of the flat screen TV, that he crosses with more grace than a tightrope walker. It is not until he is perched in the small gap above the kitchen cabinets that he assesses what to attack. Usually it is balled up socks, but he has been known to grab oranges and potatoes. Whatever his evening trophy is, he promptly tucks into bed with his humans.